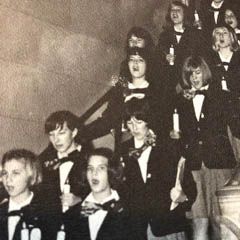 The Magic of Christmas Programs in the Mansion

12/19/2018
A chorus of girls descending the Mansion Staircase singing “Angels We Have Heard On High,” during the 1964 Christmas Program. This was an annual tradition for several decades.

Deb Hunt, Alumni Storyteller, remembers lovely Christmas Programs in the Mansion as a favorite annual arts tradition from the 1950s to early 90s. As an example, the Class of 1965 so fondly recalled their days of singing on the Mansion stairs, they proudly reprised their version of “Gloria in Excelsis Deo” during their 50th Reunion.
“Les anges dans nos compagne
Ont étonné l’hymne des cieux…”
As these words to the eighteenth century French carol, “Angels We Have Heard On High,” wafted down from the balcony above the Ballroom, electric candles flickered in the hands of the singers. The Christmas Program had begun once again at Crystal Springs School--the school's name when we were an all-girls institution. Between 1956 and 1992, this evening of music and short plays was held in the Mansion. The song, sung by the Crystal chorus, always began the evening. With parents and friends watching, a chorus of girls in their best uniforms and ties would wend their way down the Grand Staircase to take their places on the risers in front of the Ballroom windows, continuing to sing the last two stanzas of the carol. 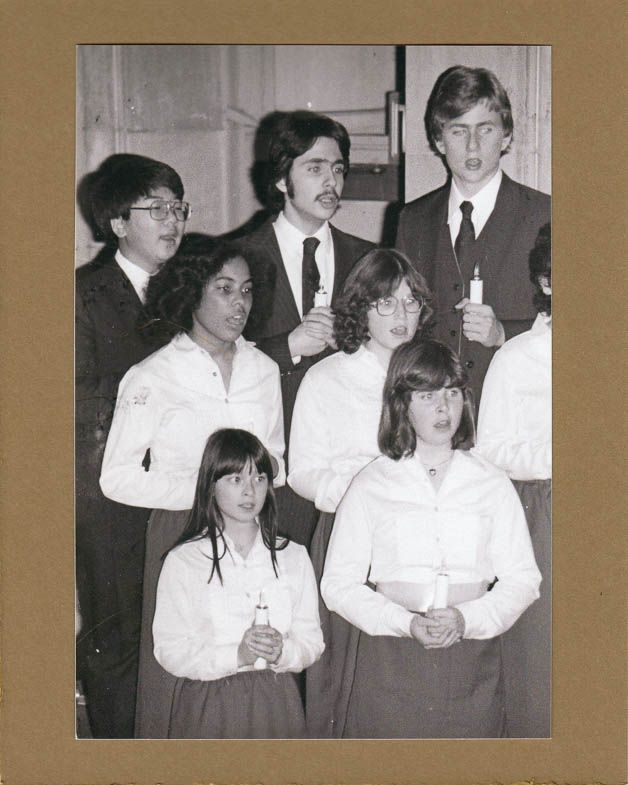 A co-ed choir ended the Christmas Program with the “Hallelujah Chorus” starting in the late-70s.
While other parts of the Christmas Program changed from year-to-year, the first carol and who sang it did not for 35 years. The battery operated candles had to be replaced a few times, Madrigals, Mann’s Men, Vick’s Chicks, Middle School Chorus and finally, an orchestra, joined the musical performances, but pride of place on the program always went to “Angels.” With the advent of coeducation in the late-70s, it rapidly became tradition to end the evening with a rousing rendition of the “Hallelujah Chorus,” sung by every vocal performer, even the Faculty Chorus. The sight of the Class of 1980, arms around each others’ waists, tears streaming down their cheeks, singing “Hallelujah!” remains embedded in the memory of every audience member in attendance that night. 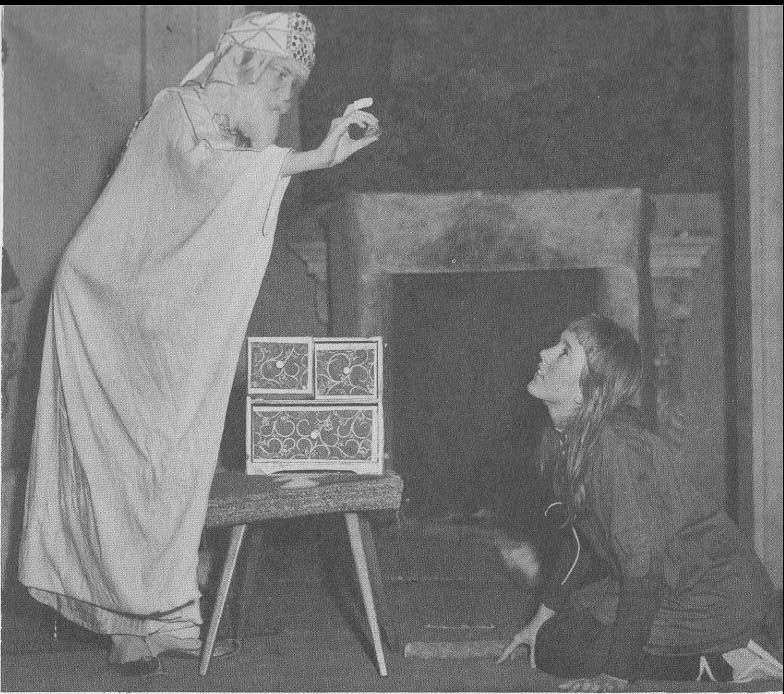 In the early years, Christmas Programs also included scenes from plays based on A Christmas Carol, Amahl and the Night Visitors, and other holiday season classics. But as the school grew, and musical participation flourished, the number of musical groups made fitting both performers and audience into the Ballroom a bigger and bigger challenge. Some audience members found themselves sitting out in the hallway with less-than-clear views of the risers. Intermission treats of hot chocolate and candy cane cookies were pushed into the Student Lounge (now the Conference Room) in order to accommodate the growing number of folding chairs. Finally, for Christmas 1993, the decision was made to move the entire event to the theater, where new traditions were formed--the Jazz Band in Santa hats, for instance. 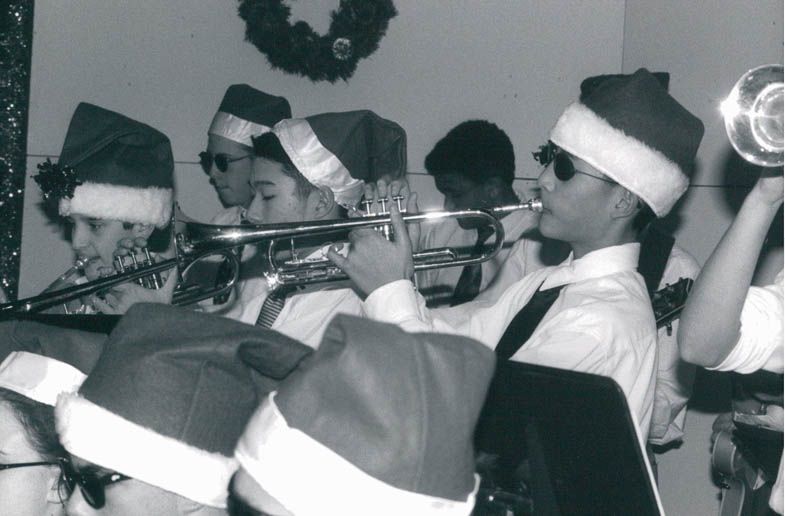 In recent years, standing room only is the rule for what is now the Winter Concert. But for those of us lucky enough to have attended one or more Christmas Programs during the school’s first several decades, the memories of the magical candlelit concerts in the festive Ballroom linger each December.