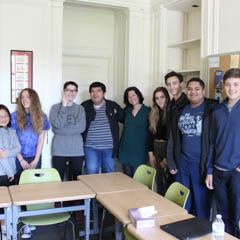 5/15/2019
For the third year in a row, Ms. Lloyd’s Creative Writing class has had the pleasure of hearing veteran film critic and Crystal alum, Marco Cerritos ’97, speak. Marco got his start writing articles for the school newspaper, formerly known as the Gryphon’s Tail, while he was at Crystal.
Following his love of film and clear desire to be involved in the industry, he first tried his hand at acting. After quickly realizing he was not meant to be an actor, he got some friends together, picked up some books about how to make films, borrowed a camera and started making shorts. Through this process he learned a lot about filmmaking. Marco then found his voice as a film writer which slowly morphed into becoming a film critic.

He spoke to the students about the importance of understanding your audience when writing. Specifically, in his work, he highlighted the need for a more colloquial tone to get points across to his loyal readers effectively. He stressed that the starting point for all his work is a deep love of movies. He advised students to watch as many movies as possible to educate themselves.

More importantly, he gave the class a secret Crystal tip, only for the true movie lovers in the room: talk to Mr. Woosnam about film. Marco says that Mr. Woosnam is not only one of the most knowledgeable people he’s ever met about film (and he has met a lot of people in the industry!), but Mr. Woosnam also gave Marco a list of movies to watch that became the foundation for his understanding about different aspects and genres of film. Watching Mr. Woosnam’s suggested movies combined with the special features on DVDs was as good as going to film school. (Marco is a huge fan of DVDs over streaming media because the quality is much better and they are still available to you when the wifi inevitably goes down.)

Movie reviews are a way to stay vital to the industry he loves. He is paid as a writer for his opinions about films--could a better job exist?