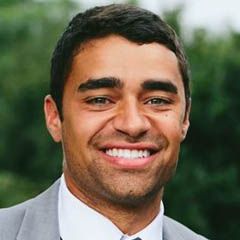 9/25/2019
When Bobby Long enters the room, it is immediately apparent that he is neither your average Californian nor your average high school athletic director. Long is young, energetic, and dressed better than a Silicon Valley executive, and after we shake hands the first thing he suggests is conducting the interview outside, where it’s 76 degrees and sunny. “Sounds good to me!”

Just in case a conversation doesn’t occur naturally, I have a list of detailed questions at the ready. This list, however, quickly becomes more of a distraction from the conversation than an aid. Long has such a wide-ranging list of interests and backgrounds that I’d be hard-pressed to introduce a topic outside his experiences. He is a former professional basketball player, a self-proclaimed nerd, an improv actor, a singer, and an obstacle-marathon runner, to name a few. He’s lived in at least five states and one European country, spent some of his childhood in Japan, and grew up in a mixed-race household. He is in the midst of a master’s program. And while his new role at Crystal is his third high school athletics job, it’s the first time he isn’t also teaching US history. Bobby Long has many passions, and they are all important aspects of his life.

When I asked Long about what constitutes success in a high school athletics program, he doesn’t speak of championships or accolades, but instead about balancing multiple interests and reaching one’s full potential. In his athletics program purpose statement, he explains that the CSUS Athletics program “[helps] students become their best selves through participation in competitive athletics…by cultivating discipline, sportsmanship, leadership, teamwork, and character.” For Long, athletic competitiveness exists alongside academic learning and core values as pillars of success, and he wants student-athletes to be recognized for their work as people, and not just as talents.

One way Long identifies how Gryphons are becoming their overall best selves is with weekly “High Fives” in which coaches highlight student-athletes for putting in good work and setting an example that doesn’t necessarily show up on a stat sheet. Here are two examples of “High Fives” for athletes this fall:

“Elaine C '21 continues to excel as the leader of the Cross Country team. She shines in checking in with her teammates, setting the tone, dispensing timely advice, and using her voice to make sure she's reaching everybody. It's an incredible luxury for the coaching staff to know that whenever we ask Elaine to handle anything, she'll take care of it.”

“Peter D ‘20 led in a way few can [on the football field] versus Tomales. Peter stepped into a new position and with drive, grit, determination, and composure he helped our team achieve the first victory of the season. Play after play he picked up yards on the ground and through the air. It was an incredible performance.”

While Long doesn’t believe that success is achieved through accolades, he has his share of championships in the past. During a tour of his office, he showed me awards and swag including custom-made “three-peat” state championship caps celebrating his last school’s lacrosse team. Other decor includes Crystal athletic photos and a picture of a young Long with Michael Jordan—his favorite athlete from when he was a child in Illinois. But Warriors fans will be relieved to know that Long has idolized Stephen Curry ever since Curry’s days at Davidson. Our conversation is dominated by discussing Curry who serves as a perfect example for Long’s athletic vision.

Part of Long’s Curry fandom is somewhat happenstance. Long was a high school teammate with one of Curry’s college teammates and, is also a small, shoot-first guard on the court. However, he appreciates Curry for more than just his basketball talent. Long explains he looks up to Curry because “He seems to bring a good attitude into all aspects of his life whether playing basketball, volunteering, or singing Hamilton songs with his daughter.” For Long, Curry’s success comes in large part because “He is the same person, whether he’s at home, whether he’s on the job, [or] whether he’s doing community service.” Many fans and sports analysts point to Curry’s personality and team-first attitude as being a significant contributing factors to the Warriors’ recent dynasty.

Like Curry, whether Long is acting in an improv show, eating a burrito at Avocado Toast, dancing to Young the Giant, or playing a game of pickup, he tries to be his best self. He wants Crystal student-athletes to be their best selves, too. It’s the Curry Long mentality.

By Simon Westley ‘15
Back