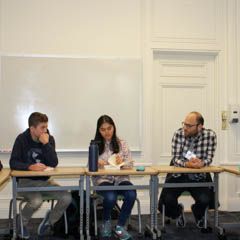 12/18/2019
Raphael Bob-Waksberg shared insights about the creative process and stories from the writers' room with Ms. Lloyd's Creative Writing class as well as with student fans and aspiring writers during a lunch talk.
Mr. Bob-Waksberg is the creator and executive producer of the Netflix series BoJack Horseman. The show revolves around a woman who discovers a "new relationship with time" after a near-fatal car crash and uses this to learn more about the truth behind her father's death. Mr. Bob-Waksberg is a Palo Alto native and a graduate of Gunn High School. He is also a friend and a high school classmate of our own Ms. Goldstein!

Mr. Bob-Waksberg spoke a great deal about feedback and collaboration. He encouraged students to strike a balance between being true to "the singularity of [one's] vision" and the benefits of a "collaborative spirit."  He emphasized the importance of being open to feedback, but also to "find the note behind the note"--consider why someone makes a suggestion in addition to what they are suggesting you do. He also encouraged writers to try suggestions out and see where they take you; "You will always have your original idea, so trying things can't hurt." When a student asked about his process, Mr. Bob-Waksberg emphasized that "writing happens when you're ready." He will take a break if he's blocked and do something that doesn't require a narrative focus, like walking the dog.  "What you shouldn't do is look at your phone!" if you're trying to get the creative juices flowing.

Mr. Bob-Waksberg is also the executive producer of Lisa Hanawalt's Tuca & Bertie, on Netflix and the co-creator of Undone on Amazon.