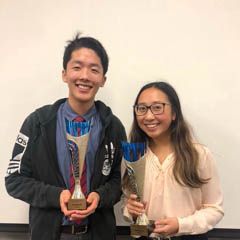 2/13/2020
The Crystal debate team recently competed in two tournaments. All of our members performed well, but we are especially proud to announce that juniors Michael M and Sophia Q won first place at the Vikings International Parliamentary Debate Tournament...

...and both advanced to the quarterfinals at the Stanford Invitational.

At the Vikings tournament held at Irvington High School in Fremont, Michael and Sophia won in the semifinal and final rounds to capture the title. The judging panel voted in a 4-1 decision for the final round.

In addition to the team being undefeated throughout the tournament, Sophia also placed 9th out of the field of 56 speakers.

As a result, they are the first  team ever from Crystal to qualify for the Parliamentary Debate Tournament of Champions. Congratulations!