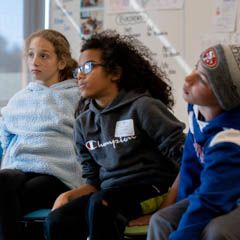 Human Library at the MS

3/9/2020
On February 24, Upper School librarian Jess Garman and six seniors brought Crystal’s first Human Library to the Middle School campus. Instead of checking out books, students were able to select people from different backgrounds as their “books” and learn more about their personal stories.
Read Jess Garman’s account of the Human Library:

The Human Library is an international organization and movement that first started in Copenhagen, Denmark in the year 2000. It aims to address people’s prejudices by helping them to talk to those they would not normally meet. The organization uses a library analogy of lending people rather than books. After seeing the Human Library for the first time last year at the Chinese American International School in San Francisco, and how powerful and special it was for their students, I knew I wanted to organize a Human Library of our own at Crystal.

With the help of six seniors, Katya, Aika, Sophie, Lindsey, Lena, and Sanaa, we reached out to people both in our Crystal community, as well as others in the larger Bay Area to gather our “books.”

We invited people to be “books” in our Human Library and share stories of how some aspect of their identity defies stereotypes and how they have persevered in the face of discrimination (this could be related to any identity characteristic – gender, race, religion, socioeconomic status, immigration status, political affiliation, lifestyle choices, etc.). Students then had the opportunity to choose two of the human books they would like to learn more about, hear those stories in small groups, and then engage in dialogue with them.

Students used a Google Site and a Google Form to rank their book choices from 1 to 3. No one received less than their second choice book.

On the day of the Human Library, students heard two different stories in groups of about 12-15 students each session. For our Human Library, these were 6th and 7th graders which is a wide developmental range of 10-13 year olds, and thus we had to prep our visitors by reminding them that they will be engaged learners but they are also students with young developing minds who at times need to be redirected. There was a teacher in each classroom as well to support the positive learning environment.

For some of these students, this was the first time they heard a story of war or transitioning. We reminded our guests that they should be mindful that there may be silence that may be needed for their processing of their important story and message.

It takes courage to be vulnerable and share a part of your life with a group of strangers. With that in mind, we reminded our students to listen with an open heart, share the air, be curious, and ask questions that support the safest possible space for brave and authentic truth-telling, for others and for themselves.

At the end of the day, our students were asked to fill out an exit ticket rating the event, sharing their favorite books, and indicating whether or not they would want to participate again in the future. Overwhelmingly, the students shared that they wanted to do it again, that they wanted to hear from their teachers and parents, and, they had something to say about each and every book who visited our campus.

Here are a few quotes:

“My favorite book was Dr Schoberl’s story, and learning that being discouraged by somebody doesn’t mean that you are limited. I learned that you don’t have to have perfect grades or go to a perfect school, to be successful.”

“Sage Bennett is my favorite book, and I learned about the experience homeless people have to go through. He had only one thing from childhood and has overcome so much. He is so smart and brave.”

“Hearing Keith Blackeys war stories impacted me the most. He fought in five wars and was in a six day war. I didn’t previously recognize the fact that being in a war zone is horrifically traumatizing. He taught me that it’s hardest for the citizens of the war zone. I really liked Keith’s stories about war and enjoyed learning that the Vietnam war lasted from 1955-1975.”

“I enjoyed Elliot Benge’s book because it was really interesting to see a story completely different from yours and hearing about not only his sexuality struggles, but his differences and family struggles to reach to multiple different Crystal audiences. I learned that if you don’t think that the road paved for you is one that you want to take, you shouldn’t be afraid to take back routes or pave your own path to be happy in life.”

“I loved meeting with Afshan. I learned that there was a spike in targeting Muslims after trump was elected and that Muslim fashion is a big deal right now. I wanted to ask her more questions and talk with her longer.”

“My favorite book was Tenzin’s (Transgender Road Diaries), and I learned that it’s hard to get into Tibet even if you are Tibetan. He is the only Tibetan using the pronoun he that is transgender. I also had never had the chance to speak with a transgender person before and he was very nice and interesting.”

“My favorite book was the civil rights activist Bruce. I did not know about how bad it was for black people and I never thought I would be in a room with someone who fought in the Civil Rights movement. He was so funny and nice and he was in an epic car chase. I couldn’t believe how much he risked to support and contribute to the Civil Rights Movement.”

“My favorite book was I Really Do See Things Differently by Mr. Elheran. I learned about retinal detachment and how it can affect your life and also overcome many obstacles.”

“Officer Stauffer was the best. I learned that a lot of people judge police based on a few individuals. There are only around 35 police officers in the station and that being a police officer is a very cool job. I want to ride in a police car someday.”

“Philip Kutner was my favorite book. I learned that blind people can still live a normal life and in order to get a driver’s license you have to have a 20/40 vision or better.”

“Cliff Hopkins was my favorite. He is openly gay and is extremely successful. He is even the CMO of Instagram! Stories weren’t always there and now he works on Broadway!”

“Learning about what it was like to be part of the Civil Rights movement form Chude was the best part. When she talked about the KKK and what they did I was shocked. I didn’t know that it was considered dangerous to be in a car with a black person at that time. I want to know more about her family.”