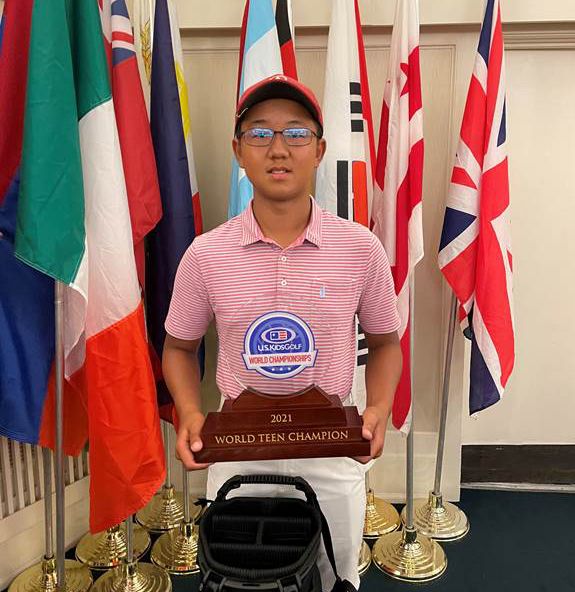 8/17/2021
Over the past few seasons, Crystal golf has had success at both the Middle School and High School levels, winning the MS WBAL championship and having two players qualify for CCS at the Upper School last season. One of the incoming freshmen joining the Golf program at the Upper School this fall will be Edan C ’25.
Edan, a two-time MS golf state champion, had quite the summer, winning three tournaments. He started in late July with the 2021 Teen World Championship and his first American Junior Golf Association tournament. At the USKids World Teen Championship, held in North Carolina at the world-renowned Pinehurst course, Edan shot 13 under par in the three-round tournament winning by four strokes. He defeated 137 players at the invite-only tournament.
Then, just a week later, he won the AJGA tournament by seven strokes, finishing 13 under par (66, 70, 67) in Greenwich, CT. Already impressive, this junior event included high schoolers from all over the country ages 14-18 years old, some of whom have already been accepted by college golf teams. Having just turned 14, he is one of the youngest players to win an AJGA open event ever!
Following up an AJGA performance like that is no easy feat. Playing in the 2021 AJGA Junior All-Star Tournament just a week later in Stanford, over the course of three rounds, Edan had 17 birdies and just two bogeys for a total of 15 under par. An opening day 63 saw him take the lead and never look back, finishing with consecutive rounds of 66 and 69. The field included 17 AJGA Champions. With the closest competitor seven strokes back, this is his 2nd AJGA win of 2021

Edan is a hard worker both on the course and the classroom, and Crystal is excited to welcome him to the Upper School. Congratulations, Edan!
Back
GENERAL: (650) 342-4175 | info@csus.org    ADMISSION QUESTIONS: admission@csus.org