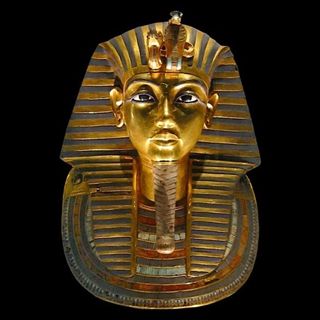 An Encounter with King Tut

9/14/2021
The entire Crystal student body participated in a memorable field trip to the de Young Museum in 1979 to see the world-famous King Tut exhibit, which included the iconic burial mask pictured above.

In 1979, the first exhibit of items from Egyptian pharaoh Tutankhamen’s tomb toured the country. Newspaper and magazine articles appeared all spring and summer.
Local television stations aired specials about Howard Carter, Egyptology, and Tut himself, not to mention what artifacts we museum-goers could expect to see. Egyptomania ran rampant: fabric with Egyptian designs, clothing, jewelry, and even coffee mugs inspired by the exhibit abounded in stores for months in advance. As luck would have it, the show opened in San Francisco just as school started.
At the assembly on the first morning of school, Head of School Dr. Loveland announced that our usual all-school trip to Jones Gulch had been postponed and that the very next morning, every student and faculty member would travel up to Golden Gate Park to see the Tutankhamen exhibit! The school buzzed with anticipation. History 7 and 9 students were given handouts with specific questions and were tasked with finding the answers among the artifacts. Art students were urged to bring sketch pads. Everyone else was asked to identify a favorite piece and to be ready to share something they had learned when back on campus.
Archaeologist Howard Carter is reputed to have told Lord Carnarvon, when he first looked into the newly unsealed tomb, that he saw “wonderful things!” The Crystal community certainly saw wonderful things when they entered the exhibit. First came the boy king’s nine-year-old portrait head, carved from wood, then painted with such detail that even the pharaoh’s pierced ear was depicted. Then came room after room of jewelry, vases, board games the pharaoh played, his boyhood throne, and another one celebrating his marriage. Unguent jars, furniture, buttons, and other symbols of kingship abounded. There were hundreds of items made from wood, alabaster, gold, and precious gems like lapis lazuli, onyx, carnelian, and turquoise. We learned the Egyptian color palette and how to play a game called Senet. Finally, there was the glorious golden death mask that was found on the pharaoh’s mummy.
As we climbed back onto our buses to depart, none of us could stop talking about what we had seen. During lunch back at school, the cafeteria hummed with conversation as the experience energized everyone. We then broke up into discussion groups, we talked about what we had seen, what we learned, and which objects were our favorites. The variety of takeaways was marvelous to hear. All agreed that postponing our annual trip to the Buckeye Forrest and the Indian Bowl was entirely worth it to spend a day in Ancient Egypt!
Back
GENERAL: (650) 342-4175 | info@csus.org    ADMISSION QUESTIONS: admission@csus.org