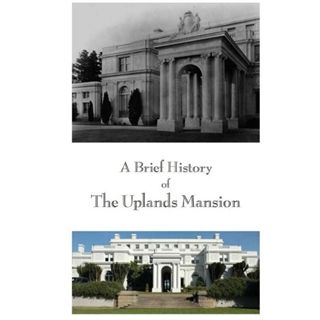 More About the Uplands Mansion

9/14/2021
Deb Hunt literally wrote the book on the historic Uplands Mansion, the centerpiece of the Upper School campus and first permanent home for Crystal.
You can read the entire booklet here: A Brief History of The Uplands Mansion

In the summer of 1974, I drove up Canada Road to Hillsborough to be interviewed for the job of school librarian at Crystal Springs School for Girls. As I sat in the Head of School’s office nervously, I was struck by the beauty of that Gothic room and wondered about the history of the building itself. I thought to myself, “I could definitely enjoy working here.” Then I saw the library and I was sold.

I was surprised to learn how little was really known about the building by my colleagues. I learned that it was constructed between 1912 and 1917, that the first owner was Charles Templeton Crocker, and that the architect was Willis Polk (of Filoli fame). Other than those facts, no one seemed to know much. So I set out to find out why the house was Neoclassical on the outside, had the footprint of a Renaissance palazzo, the furnishings of a French chateau, and so many fireplaces! Back then, there were two distinct levels in the basement of the home that made no obvious practical sense. There was a lot to discover.

So when I wasn’t resurrecting the library from several years of neglect, I was poking around in the basement, visiting the county historical society, and learning all I could about the Crocker family, the builders, and the original owners of our Uplands Mansion. Templeton Crocker, it turns out, was the grandson of Charlie Crocker, one of the Big Four of Central Pacific Railroad fame. He was the son of Charles F. Crocker, the president of Crocker Bank. Templeton was born, therefore, a multi-millionaire in a large home on the site of the current Mansion, known locally by the name of its builder as the Howard House. He and his two sisters grew up there, the girls debuted in San Francisco society, and Templeton went east to study classics at Yale. After graduation, he took a grand tour, circumnavigating the world during the following year and purchasing many European and Asian artifacts along the way. Then, in 1912, he married Helene Irwin, one of the heirs of C&H Sugar, and began building her a “honeymoon cottage” on the family estate.

For almost five years, with Willis Polk’s designs and supervision, the Uplands Mansion rose above the trees. When Templeton’s boyhood house was moved down the hill to make room for the new construction, it was decided that the original foundation could be used as part of the new foundation, which now forms the higher part of the current basement. The deeper, longer part, reflects how much larger and heavier the new house was than the old one. Upstairs, what had been a large, but essentially cozy bungalow style home, became a “small” palazzo, including a dining room that could seat forty, a study, a library, four safes, marble fireplaces, a late sixteenth-century ceiling, a minstrels’ gallery, and numerous carved references to the classical past.

Once the four imported Bavarian woodcarvers had completed their work on the Gothic study, the dining room ceiling, and the library, a gala housewarming party was given in the summer of 1917.  Architecture critics from San Francisco newspapers deemed it the loveliest mansion of its size in Northern California. Thus began ten years of tea dances, fox hunting weekends, and endless dinner parties.

In 1927, however, the social whirl ended when the Crockers divorced. Templeton continued to spend summers and Christmases at the house for another decade, but in 1940, he sold the house and moved permanently back to San Francisco. Fifteen years later, the trustees of the Crystal Springs School for Girls bought the house and ten acres from the Crocker family. As a family home, the Uplands Mansion was a bit cavernous. But as a school, it has been ideal.
Back
GENERAL: (650) 342-4175 | info@csus.org    ADMISSION QUESTIONS: admission@csus.org