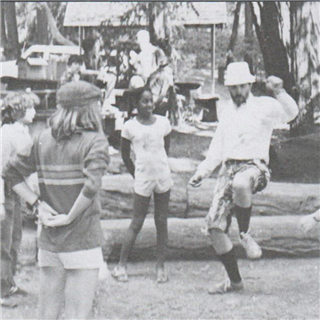 9/14/2021
Right after Labor Day in the 1970s and 80s, the entire school climbed onto buses and rode up to the Jones Gulch YMCA Camp above La Honda for our annual back-to-school retreat.
In the 2000s, Jones Gulch hosted only the seniors’ retreat and which was across the road from the main campground at the ropes course. Now, Jones Gulch hosts both the freshman and the seniors—the latter continues the tradition of sleeping under the stars.  Now that the Middle School grades have 72 students and the Upper School classes will be 90 students, we can’t all fit at Jones Gulch. The other grades have their own retreat adventures at different sites, including hiking, kayaking, surfing, whitewater rafting, and more.

Back in the Loveland years at Jones Gulch, the main camp, featuring a dining hall, a swimming pool full of very cold water, athletic fields, an archery blind, a bandshell, numerous cabins, and Simcock Lodge were all part of the retreat experience. Students were divided into groups of three or four from grades 6-10 and assigned a cabin, along with a teacher. The idea was to make a few friends from other grades right at the start of the year. Juniors spent the night in Simcock Lodge discussing what it meant to be an upperclassman, and seniors hiked up to the Indian Bowl to spend the night camped outside together. Many alums remember the hikes in the dark with Nancy Rosenthal leading the way. Up at the Indian Bowl, sleeping bags were rolled out, s’mores were roasted and consumed, and guitars came out for group singing. In the daytime, there was summer reading discussion groups (one year, we all read Hunger of Memory together and then Richard Rodriguez came to talk to us about it; another, it was 1984); swimming; sports of all sorts; nature walks in the Buckeye Grove; Blue Sox vs. White (and later Red) Sox games; barbecues; campfires and skits.  There was even a climbing wall and a giant pole to shimmy up. We sang, we laughed and we greeted each other after the long summer by holding contests to see who could learn the most new student names. School didn’t really start until the Monday after we returned from Jones Gulch!
Back
GENERAL: (650) 342-4175 | info@csus.org    ADMISSION QUESTIONS: admission@csus.org